I’m always getting asked about birthstones, and so I finally thought it would make sense to make a section on my website for them. I started off quite ambitiously trying to include every system I could find, but that quickly got a bit complicated and, well, large. So I’ve stuck to modern British and USA systems. There’s a huge choice for every month and I’m looking to boost my selection of precious stones this year, so look out April, May, July and September birthdays! You can browse the selection in my new ‘Shop by Birthstone’ section.

What could I be talking about except garnet! You know what I mean; dull, rusty red stones set in gold-plated filligree. Nope. It’s just not fair. Garnet is one of the most exciting and varied of gemstones. It’s got a very wide colour-palette and price-wise it varies from the highly reasonable almandine to tsavorite at the top-end. It is also the birthstone for January.

Garnet has particular gemmological properties that make it reasonably straightforward to cut – it is what is known as singly refractive so what this means in real terms is that it is not at all pleochroic and therefore cutters don’t have to worry about what angle they are cutting it to make sure they are getting top colour. Many varieties also have a relatively high refractive index. What does this mean? Well, it is a measure of what happens when light hits a stone – a high index means that much of the light is reflected back to your eye; a low index means that much of the light passes right through. In real terms, stones with higher refractive indices are more sparkly. With the darker stones it’s not so obvious, but the sparkle on some tsavorites is simply amazing. See below and bottom for some examples of seriously stylish garnet jewellery. 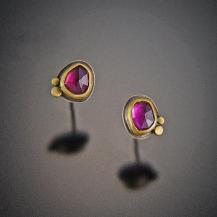 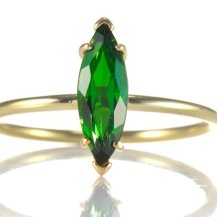 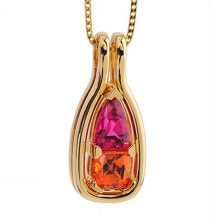 Red is the best-known colour of garnet, and the type that most people think of when they think of garnets is almandine. This commonly comes up very dark, what we call ‘closed’, and especially in larger sizes; however, it can be the most beautiful shade of deep blood-red. I have some almandine pears which just make me think of Sleeping Beauty every time I see them!  In fact, the name ‘garnet’ comes from the Latin word ‘granatum’ which means ‘dark red’. Pyrope garnet is also red; you see it more rarely and it often has a slightly pinker note to it – it lacks the rustiness you can sometimes get with almandine. For a more pronounced pink colour there is rhodolite which ranges from pinkish red to a deep raspberry pink. For orange, there is hessonite, with its gorgeous swirling inclusions, and more expensively, spessartite. Malay garnet runs from yellow-orange to a lovely pinkish orange. Then you get the greens; hydrogrossular garnet with its black inclusions, yellowish-green demantoid with its horsetail inclusions, and vivid green, sparkling, firey grossular garnet, more commonly known as tsavorite. This is one of my favourite stones and I would take it over emerald any day. Garnet is also a really good choice for anyone who is not keen on gem treatments as it is not routinely treated with heat or anything else. 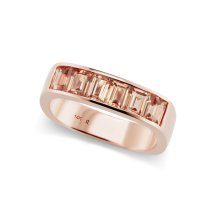 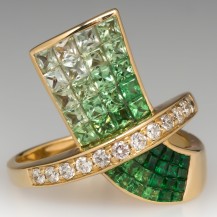 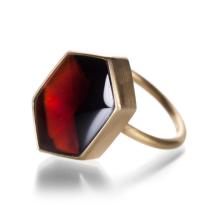 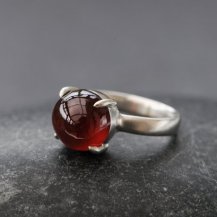 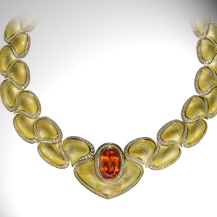 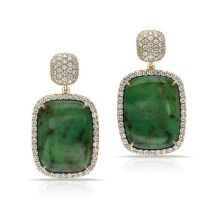 I’ll be doing posts on individual types of garnet so keep your eye out for those. I have a large variety of garnet stones; click here to browse the collection.

I'm a Hong Kong based Brit; a psychologist turned jewellery designer, turned gemologist. I sell gorgeous, high quality mainly semi-precious gemstones, specialising in rose cuts, cabochons and pearls, but branching out into more high value mixed cuts. I have a carefully nurtured reputation for high quality and great service and I am a GIA Graduate Gemologist (GG). This blog is where you’ll find information about new arrivals in my shop, discounts and offers, as well as stuff that has caught my eye.

Hot off the press