This is one of my favourite stones, and the most valuable of the red garnets. Rhodolite garnet has a colour range between pinkish red and deep raspberry pink and it’s not just a colour call that distinguishes it from other red garnets; it is to do with its composition. It’s a mixture of pyrope and almandine garnets, with its own distinctive refractive index, and it tends to come up a bit cleaner than almandine. Although its plentiful and reasonably priced, garnet does generally have a high specific gravity – what does this mean? It means that it’s dense and stones are relatively heavy for their size.

One of the things that surprised me about garnet when I was doing my Gem ID course, is how sparkly they are. I suppose, like alot of people, I used to underrate garnet a bit, and it was only when I was looking closely at it that I saw how special it was, how surprisingly sparkly. At their best, the colour can rival tourmaline or even ruby or spinel and they work very well with a number of other stones. Rhodolite got its name from the Greek word ‘rhodon’ which means ‘rose’ and its very apt. My mum is a January birthday and over the years, she has been inundated with lots of garnet jewelry – some of it not all that nice, it has to be said, but you know, when you’re 12 your budget is a bit limited! A few years ago I upgraded her to a pair of rhodolite and 18k gold earrings, and even she was surprised that garnet came in such a rich purply-red. Check out the versatility, clockwise from left below, Sarah Hendler Rhodolite and Sapphire Ring in 18k gold, Tessa Packard Puzzle Earrings in Rhodolite and Gold Vermeil, Art Masters’ Rhodolite and Black 14k Gold Mens’ Engagement Ring, Jewelry by Johan’s Rhodolite, Dinosaur Bone and Purple Heart Wood Ring in 14k Gold, Master Goldcraft’s perfectly simple but beautiful Rhodolite and 18k Gold Ring, and the very pretty and unusual Rhodolite and Sterling Silver Mermaid Ring by Peanut Gallery Jewels 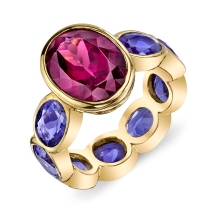 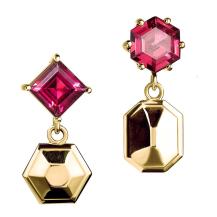 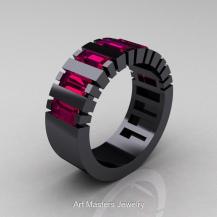 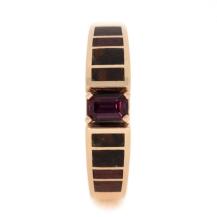 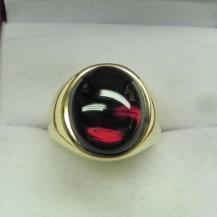 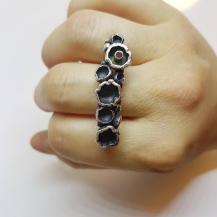 We have a large selection of rhodolites at Joopy Gems; to browse our collection, click here.

I’ve been promising these for ages and they are finally here! 2mm rose cuts and cabochons in a variety of stones. They really are so tiny I can’t imagine what you are going to do with them, so pictures please! Also probably best not to work with these if you have a heavy cold… I have all the usual suspects; garnets, turquoise, amethyst, peridot, citrine, white topaz, opal and more. Two things about these stones; firstly, because they are small, you’re not going to get the saturation on the transparents, and some of them are quite light; for example the peridot is light green, the amethyst is light to mid purple, the almandine garnet is pink to orangey-red, the rhodolite is pinkish. The other thing is the price. It’s not easy to get these cut and it is rather expensive; most of the rose cuts are around the $2.85 mark per stone, and the cabochons $1.45 (some – the ruby, emerald and turquoise, for example, are still more). Most of the cost of these is in the cutting, but the up-side is that because of this, they are really unusual and not everyone is going to have them. Why not give them a whirl – I can see rings dusted with gemstones, earrings with tiny scattered points of light…and please do send me pictures of your creations! To shop 2mm rose cuts, click here; to shop 2mm cabochons, click here.

I love rhodolite garnet, and its beautiful colour range from pinkish red through to purplish raspberry. Even the redder shades lack the rustiness you sometimes find with almandine, and whilst the prices are reasonable, at its best, the colours can rival red tourmaline. Rhodolite, for those interested, is a mixture of pyrope and almandine garnet and it’s the most valuable of all the red garnets. Despite this, it’s not hard to find clean quality stones at a good price. Here, for the first time, I am offering rhodolite garnet as rose cut freeforms, and I’ve got a good representation of the whole colour range. These stones are rose cut on the top and have a shallow, faceted table on the bottom. To shop, click here. This cut is fantastic for one-off creations, such as the ring below by Symmetry Jewelry; a trio of garnets, this contains rhodolite, spessartite and mandarin garnet set in 18k gold bezels on a sterling silver split shank.

I'm a Hong Kong based Brit; a psychologist turned jewellery designer, turned gemologist. I sell gorgeous, high quality mainly semi-precious gemstones, specialising in rose cuts, cabochons and pearls, but branching out into more high value mixed cuts. I have a carefully nurtured reputation for high quality and great service and I am a GIA Graduate Gemologist (GG). This blog is where you’ll find information about new arrivals in my shop, discounts and offers, as well as stuff that has caught my eye.

Hot off the press